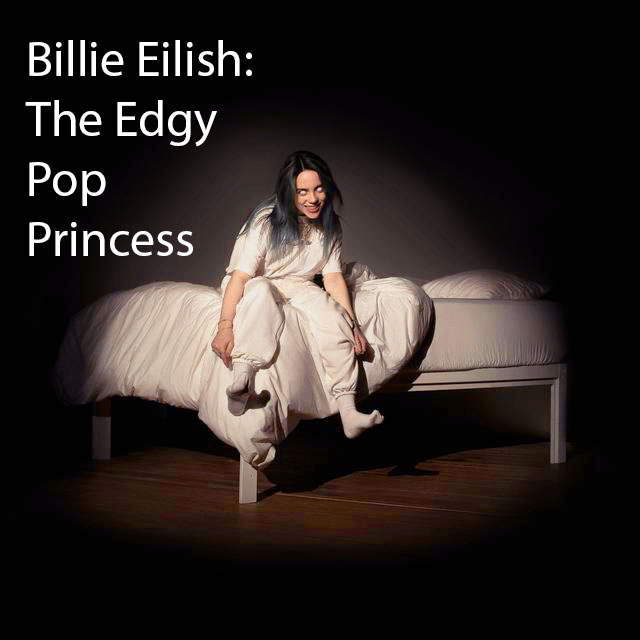 A photo illustration from Eilish's newest album, "WHEN WE ALL FALL ASLEEP, WHERE DO WE GO?"

She’s the teen that almost everyone has heard of. Her U.S. tours are entirely sold out, with international headed that direction too. She’s been on “Ellen” and “The Tonight Show” starring Jimmy Fallon and is talked about everywhere. Her name is Billie Eilish, and she is only 17 years old.

Billie Eilish Pirate Baird O’Connell, professionally known as Billie Eilish, is a singer/songwriter that is sweeping the earth. She is best known for her breakout hit, “Ocean Eyes” which was released on Soundcloud in 2016. Since then, her debut album, “Don’t Smile at Me” has blown up as well.

Her newest album, “WHEN WE ALL FALL ASLEEP, WHERE DO WE GO?” was released on March 29, 2019. Her brother, Phineas O’Connell, is her producer as well as her lyric writer.  With her massive and abrupt fame, is she a profound artist, or is she just another trend that will die out in a few months?

Eilish has always had a light, airy feel to her music. Her music style is indie pop, but her songs range from harder hitting such as “bad guy” to more soft and sad songs such as “i love you”. In “bad guy”, Eilish repeatedly states that “I’m the bad guy, duh!” Then, in the last 40 seconds of the song, the tempo changes dramatically. The lyrics become more captivating. “I like when you get mad/I guess I’m pretty glad that you’re alone/You said she’s scared of me?/I mean, I don’t see what she sees/But maybe it’s ’cause I’m wearing your cologne.” The dark undertones in the video suggest that she is a bad guy, as her song says.

As for her song “i love you”, it is much softer and light like most of her music, with more depressing lyrics makes for a classic sad song.

Finally, the new album ends with the song “Goodbye” in which she sings lyrics from all her songs rolled up into one.

Chase Franklin, who is the same age as Eilish and a music fan, is a fan of her music style and rise to fame. “I believe she is popular because of how different she is,” said Franklin. “Her sound does not match the stereotypical 17-year-old female singer…She has both personal stories and ones in which she tells a fictional story. Her song ‘Bury A Friend’ talks about having depressing thoughts and is very in-your-face. The song repeats the phrase ‘I wanna end me’ multiple times through the track.”

Franklin feels her success can’t be pinned on one thing.

“Her success can be attributed to multiple things: one of them is her distinct brand of pure honesty and storytelling, often leaning towards darker themes. Students are attracted to her sound because she has something that almost no one else has–a unique voice. Her personality is lovable as well, so people enjoy seeing her perform and do interviews. In one concert she even stopped a performance so one of her fans could film without missing anything. Students tend to suffer from anxiety and depression due to high pressure from parents, schools and college admissions. They can relate to Eilish’s music due to her frequent references to mental health issues and confidence,” said Franklin.

Todd Roper, formerly the drummer for CAKE, also commented on Eilish’s popularity. “Her music makes me feel light, as well as interested in what she is going to say next. She’s soft-spoken, so you have to pay attention. She sounds different, but she seems to be about emotions and things that people can relate to. Eilish might be a little more popular than she deserves, but I think she is a good singer.”

Carolani Green, who has never listened to or even heard of Billie Eilish, gave her first impressions of the song “When the Party’s Over”. “She’s wistful and airy, almost like you’re just floating. She seems like she’s connecting with people who are trying to connect themselves like she knows what they’re going through. Time will tell if she is overrated. If she makes a good one in the future, then she’s fine. If she can’t make another hit then yes, she’s overrated,” said Green.