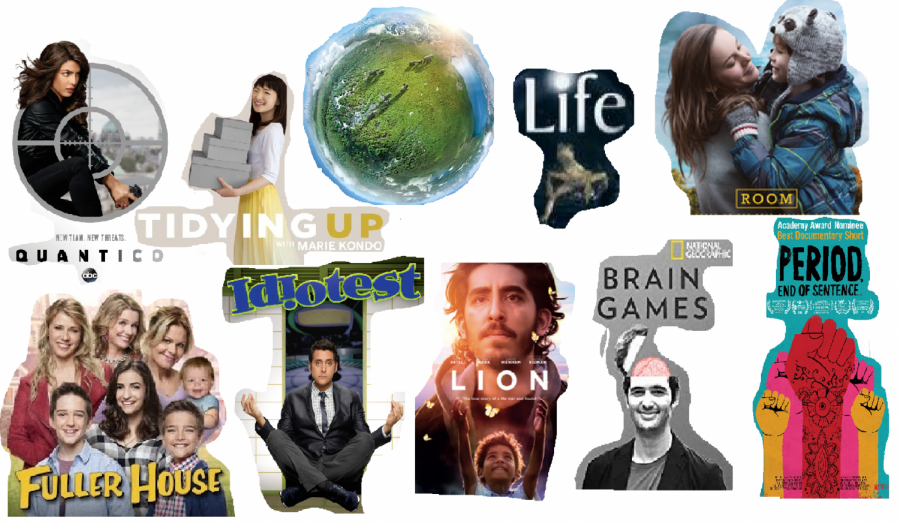 Summer is coming up, and let’s be honest—you’re probably going to spend it binge-watching Netflix. Here are some hidden gems you may not have heard of:

“Tidying Up with Marie Kondo”

About: This Netflix original follows Japanese organizing expert, Marie Kondo, as she goes from household to household teaching families her method of organizing, the KonMari method, and helps them transform their lives with this new lifestyle change.

“BBC Planet Earth” I and II

About: BBC takes the viewer all over the world and shows the lifestyles of a variety of species. With incredible videography and witty commentary, this show is a truly entertaining masterpiece, especially for nature and animal lovers.

About: This show is an engaging way to learn about human psychology. The host, Jason Silva, uses mind games, psychological experiments, humor, and statements from experts to teach a new concept in each episode. Freshman Anneliese Day recommends this show to “anyone who likes to learn while watching TV.”

About: An inspiring documentary based on a true story about women in rural India fighting to break the stigma against menstruation. This critically-acclaimed film won the Academy Award for Best Documentary Short Subject in 2019.

About: Similar to BBC Planet Earth, this nature documentary shows the viewer the lifestyles of many wildlife species all over the world. What’s different from BBC Earth about this is that it is less informational and prefers to show the viewer instead of telling the viewer.

About: Quantico is about an FBI agent, Alex Parrish—played by Priyanka Chopra—and her progression through the missions she is on. Each season has its own specific mission—season 1 documents her FBI training and shows her and her team investigating who committed a major act of terrorism, season 2 shows her going undercover as an FBI agent in a CIA training program, and season 3, which came out recently, shows Alex’s anonymous, peaceful life being disrupted when she has to rescue her friend who is being held hostage by a notorious international arms dealer. This series is a thrilling, suspenseful show that will keep the viewer on the edge of their seat until the very end. “I liked that the show had an Indian lead because I don’t see that often and I loved the mystery and suspense,” said junior Anoushka Ambavanekar, about season 1 of “Quantico”. “I would recommend the show to anyone who’s a fan of cop shows or mysteries.”

About: Idiotest, hosted by comedian Ben Gleib, has two pairs of adults compete with each other to answer tricky brain teasers. With the intense time pressure they face, they sometimes miss really obvious questions. The show allows the viewer to play along with the contestants, making it more entertaining so the viewer can see how they measure. Day says she likes this show because, “people are stupid and it’s fun when I’m smarter than adults,” and that, “It’s a good show to watch at 3 am when you want to feel smart.”

About: This heart-wrenching movie is based on a true story about a boy living in rural India losing his mother at a train station and being sent to an orphanage. From there, he is adopted by a couple in Australia and grows up having a happy, normal childhood. When he goes to college, he suddenly becomes determined to find his mother. Using only basic technology and the slivers of his memory that has remained, he tries to track down his family from a tiny, remote village.

About: A young woman, played by Brie Larson, and her 5-year-old son are held captive for years in a room. They make a successful plan to escape and her son begins to experience the outside world for the first time. This heart-wrenching thriller makes you feel grateful for the little things taken for granted every day. “I would recommend this movie to people who like being tense and who are like ‘What’s gonna happen now?’” said junior Anastasia Fernando.

Genre: Comedy
About: This show is a spin-off of the American classic, “Full-House.” It takes place approximately 25 years later and shows DJ, the main character, Kimmy, her best friend, and Stephanie, DJ’s sister—who are played by the same actresses as the original—all living together in the same house with their children. “I loved that it was bringing back to life the original Full House, and that we got to see the characters we loved so much all grown up,” said junior Aniqa Tasnia, “[however,] I didn’t feel like it lived up to the original. It’s less wholesome and its humor feels more forced, kind of cheesy.”