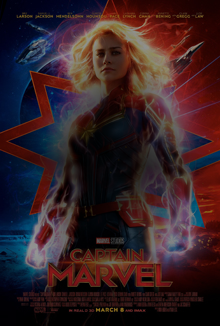 Directed by Anna Boden and Ryan Fleck, Captain Marvel, played by Brie Larson, is an intergalactic Kree warrior caught in a war between her people and the Skrulls. She crashlands on Earth, during the 1990’s and has recurring memories of being a U.S. Air Force pilot, So she asks Director Nick Fury, played by Samuel L. Jackson, for help to get her memories back and stop the war with the Skrulls.

The Kree appear in multiple Marvel movies, such as “Guardians of the Galaxy,” where they assist in the defeat of Ronin. This alien race focuses on expanding their government and rule other planets—they are willing to go into war to achieve their goal.

The Skrulls are shape shifting warriors whose planet was infiltrated by the Kree.

Stan Lee and Gene Colan introduced Captain Marvel  in December 1967 but was known as Captain Mar-vell. At the time, comic books only appealed to men, as the original character was a male until 1968 when the character of Carol Danvers was created. She was known as Ms. Marvel until 2018 when she became Captain Marvel.

In “Captain Marvel” #33, written by Jim Starlin and Steve Englehart and illustrated by Stalin and Klaus Janson, Mar-vell fought Thanos with the help of Drax the Destroyer and Mantis, two heroes from “Guardians of the Galaxy.”

Marvel has dozens  of movies that all connect to each other. “It’s a lot to catch up on, but it’s worth it.” said Samantha Heatlie, a long time Marvel fan.

The movie is an inspiration to many who follow the MCU. “The true beauty in the superheroes and in Captain Marvel allows us to see a little bit of ourselves in them. That is why so many people are interested in them,” said Huy Le, an expert in Marvel comics.

Because of Marvel, million of fans come together to express the love for many superheros, such as Spiderman, Dr.Strange and more. Captain Marvel is said to have a strong impact in the newest Avengers movie